Tuesday, July 23:  Tonight I stroll not far from my hotel in Bairro Alto to Café LUSO, a Fado House established in 1927.

In the 1930s, the old cellars and stables of the Palace Brito Freire, a 17th century manor house that endured the devastating earthquake of 1755, were refurbished into a show room with restaurant; its arched vaults offer unique acoustics.  From the first decades of the 20th century, Café LUSO reached such notoriety that it was known as the “Cathedral of Fado”.

The show, running between 8.30 and 10 PM, is a display of regional folk dances and singing alternating with fado singers and players. At the end of the show, all together, they all sing the Café LUSO hymn.

The Folklore group wears real costumes that typify the various regions of Portugal.

Fado arrived in Lisbon by way of Portuguese navigators and other travelers.  Despite the many influences on Fado, as a result of the Portuguese diaspora, it was clearly identified since the 19th century as a genuine national song.

The voice is accompanied by the Portuguese guitar and viola, but also other instruments such as contrabass, piano, bass and cello.

Black is prevalent on the apparel, feminine and masculine; the use of black clothes visually emphasizes the sadness and nostalgia, overwhelming feelings in traditional fado. The female singer often uses a shawl that composes the figure with meaning; this ornament can be dashing and rich.

Fado is a musical genre that can only be explained as an old lament over the threats that all of us go through life, with episodes that can be painful and explain our mortality.

It covers life, love or disdain, graces or disgraces, loss and “saudade”, the very Portuguese word synonymous with longing and missing.

Obviously, Fado does not have one single style of interpretation.

I love the evening here at Café LUSO, even though it is a tourist place, bursting with tables of Chinese people.  I am a little disappointed in the ratio of folklore dances to fado; it seems the folklore dances make up the majority of the show, with only a few soulful fado songs.

The menu is very limited and nothing special at all.  And of course it’s expensive.  Oh well, maybe next time I go to Lisbon, I can find a small, off-the-beaten track fado house, where the locals go.

It served as the Society’s home church in Portugal for over 200 years, before the Jesuits were expelled. After the 1755 Lisbon Earthquake, the church, which survived the earthquake relatively unscathed, was given to the Charity House of Lisbon to replace their church and headquarters which had been destroyed. It remains a part of the Santa Casa today, one of its many heritage buildings (Igreja de São Roque).

After a wave of the plague swept over Lisbon in 1505, the King Manuel I (1495-1521) asked the Republic of Venice for a relic of Saint Roch, whose miracles, which helped the victims of the plague, were popular in southern Europe.  In 1506, the construction of a shrine to host the relic was started in a heath outside the Fernadine wall.  The churchyard of this shrine was used as a cemetery for the victims of the plague.  A brotherhood was created and made responsible for maintaining devotion to the Saint and for preserving the shrine.  The shrine was later demolished to build the Church of São Roque.  The original relic is still preserved.

Igreja de São Roque contains a number of chapels, most in the Baroque style of the early 17th century. The most notable chapel is the 18th-century Chapel of St. John the Baptist (Capela de São João Baptista), constructed in Rome of many precious stones and disassembled, shipped and reconstructed in São Roque; at the time it was reportedly the most expensive chapel in Europe.

The chapel came about through the efforts of King Joao V (1707-1750), who promoted a vast program of grand architectural projects and works of art to show the image of a renewed and refined Portuguese state, which was not behind the main European powers of the time in any way.

The Museu de São Roque is in the space of the old Professed House of the Society of Jesus, adjoined to the Church.  It holds the important collection of Italian art which was the origin of the Chapel of Saint John’s creation.  In the 1930s, the exhibit expanded  to include a wider variety of pieces.

Tuesday, July 23:  I’m not a big party girl while I’m on holiday, but if I were, Lisbon’s Bairro Alto would be the place to play.  The neighborhood is a short walk from my hotel, and this afternoon I explore its graffiti-splashed streets during the sleepy daylight hours.

This evening at 8:00, I’ll walk back to this part of the neighborhood to attend a fado performance at Luso.

I stop for a late lunch at what has quickly become my favorite lunch spot, LOSTin, right across the street from my hotel, with grand views of Lisbon.  I order a sandwich and enjoy the pink, green and royal blue wicker chairs shaded by Indian patchwork umbrellas.  This Esplanada Bar is an Indian snack-like restaurant that serves meals like toasts, wraps and sandwiches, but with an Indian flavor.

I order a ham and cheese sandwich, but it sounds a lot more fancy than that on the menu.

After lunch, I continue to explore the neighborhood, passing by the Elevador da Gloria once again. 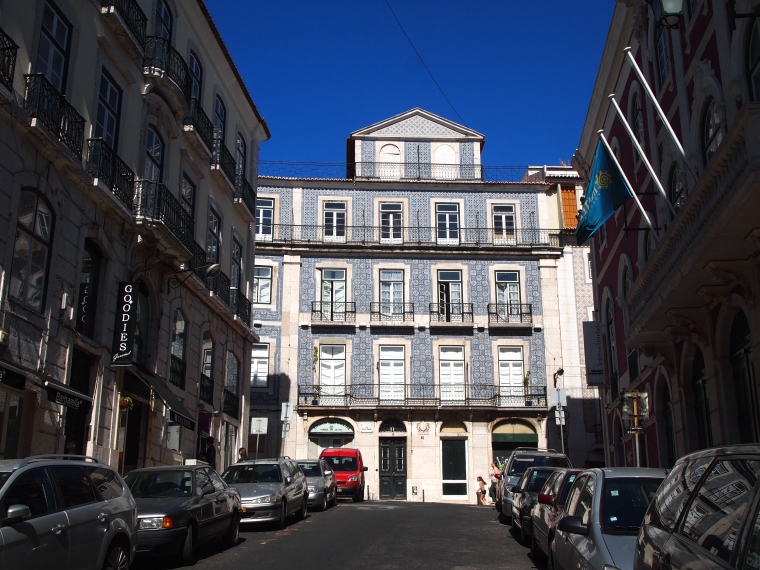 Tuesday, July 23:  Today, I still have access to the Lisbon Sightseeing Hop On Hop Off bus until 2:00, so I take advantage of that to go back to Alfama to see the Museu do Fado.  I’ve determined that today, my next to last day in Lisbon, will start and end with fado, as tonight I will go to a show at Luso in Bairro Alto, near my hotel.  Though I made reservations to see a show in Alfama at Clube de Fado, I’ve discovered that Luso is within walking distance.  Not having to take a taxi when the late night show finishes will be a great relief.

I’m more than a little annoyed that I’m required to leave my small backpack, which I use as a purse while I travel, at the front desk, receiving only a claim ticket which will enable me to pick up all my valuable belongings, including my passport, money and all credit cards, when I leave.  Once I hand over my bag, I have no pockets in which to carry the claim ticket, so I’m worried about losing it the whole time I’m in the museum.  I really don’t see the need for this policy, which makes it hard for me to relax and enjoy the museum!

The museum traces fado’s history from its working class roots to its international fame.  It displays discs, recordings, paintings, posters, a hall of fame, and a re-created guitar workshop.  The Alfama is the birthplace of fado, so it’s a pleasure to wander through the museum getting a feel for its history.

Since its creation in 1998, the Museum has incorporated a unique body of collections: several collections of periodicals, pictures, posters, music scores, music instruments, phonograms, clothes and performing props, trophies, medals, professional documents, contracts, licenses, professional cards, among many other testimonies that co-existed and/or created Fado. (Museu do Fado: History)

According to Wikipedia, fado is popularly believed to be a form of music characterized by mournful tunes and lyrics, often about the sea or the life of the poor, and infused with a characteristic sentiment of resignation and melancholia. However, today fado is regarded, by many, as simply a form of song which can be about anything, but must follow a certain structure. The music is usually linked to the Portuguese word saudade which symbolizes the feeling of loss (a permanent, irreparable loss and its consequent lifelong damage).

In one room of the museum, large soft leather chairs hooked up with headphones invite visitors to sit for a while and listen to fado.  I could sit here all day listening to the beautiful mournful music if I had more time in Lisbon.

In the years immediately after the April 1974 revolution, a hostility towards fado was evidenced by a two-year interruption of the contest Grande Noite do Fado and the radical decrease of fado’s presence in radio or television broadcasts.

In fact, only when the democratic regime became stable, in 1976, would fado regain its own space. The following year the album Um Homem na Cidade was released by one of the biggest names of Lisbon’s urban song, Carlos do Carmo, a central figure of fado’s internationalization (Museu do Fado: Fado History).

Luckily, I don’t lose my claim ticket, so after I finish at the Museum, I’m able to pick up all my valuables.  I catch the Hop On bus on its round trip through Alfama; I hop off at the top of the hill for another view of Lisbon and another pastel de nata.  🙂