Tuesday, August 16:  This morning, we meet a young Chinese lady and her mother in the breakfast room at Freyja Guesthouse.  It turns out they’re going to pick up their rental car in Reykjavik today and then head around the Ring Road (Route 1) north to Akureyri.  We’re doing the same today, but as we already have our rental car, we can get an earlier start.  It’s nice to chat with them about our shared experiences in China; the daughter, Wang Wang, can speak fairly decent English; her mother can speak very little.  This is the second time I’ve met a Chinese mother and daughter traveling together.  The first time was in late July of 2015, soon after I left China; at that time, Mike and I met my student Christine and her mother in Washington as they were traveling down the East Coast.

When we leave Reykjavik it’s raining. So far, we haven’t had luck with the weather. We pass ponds, streams, harbors and rivers all over the pastoral area known as Hvalfjörður.  We find farms tucked into the flat areas at the bottom of rumpled and fuzzy green mountains.  They’re usually isolated places, set alone on a plain with a mountain backdrop.

Not too long after we leave the city, we go through a 5.7km long tunnel under Hvalfjörður.  Before the tunnel was built in 1998, drivers had to spend an extra hour going around the fjord.  The tunnel seems to be made of solid stone and runs 165m below sea level.

I love the treeless mountains of Iceland.  Covered in moss, they look like behemoths covered loosely in a blanket of velvet .  Everywhere we see bales of hay, wrapped in white or black plastic wrap, lined up neatly atop green fields.  The farmhouses and barns are often white-walled with red roofs, and when rays of sunlight hit them at the right angle, they glow like beacons from another world.

And then of course there are the Icelandic horses. These horses, bred in Iceland, may look the size of ponies, but they are actually registered as horses.  Long-lived and hardy, in their native country they have few diseases.  Icelandic law prevents horses from being imported into the country and exported animals are not allowed to return (Wikipedia: Icelandic horse).

The horse displays two gaits in addition to the typical walk, trot, and canter/gallop commonly displayed by other breeds. The first additional gait is the four-beat lateral ambling gait known as the tölt.  The second additional gait is called a skeið, flugskeið or “flying pace.” It is used in pacing races, and is fast and smooth, with speeds often reached up to 30 mph (Wikipedia: Icelandic horse).  Not all horses have this latter gait.

I have been a horse lover since I was a girl; because of this I’m always urging Mike to pull over when I see them standing near the road.

As a matter of fact, I’m constantly asking Mike to pull off the road so I can take pictures of everything.  I love the farmhouses and barns, the sheep, the horses, the sweeping and strange landscapes that change around every turn.  It will take us forever at this rate to get to Akureyri, 242 miles from Reykjavik.

We decide to fill up with gas at the N1 at Borgarnes, a tiny town that has one of the original settlement areas and sits on a scenic promontory at Borgarfjörður.  It costs us about 5,300 Icelandic krona, or around $46 to fill half our tank!  It’s expensive to rent a car in Iceland, and even more expensive to drive it!

While I’m in the gas station getting some coffee, I chat with a woman who’s from Lancaster, Pennsylvania.   She and her husband are heading west to the Snæfellsnes Peninsula in Western Iceland.  It’s known as “Iceland in Miniature” because many national sites can be found there.  Sadly, we miss this area of Iceland, which boasts the volcano Snæfellsjökull, the setting for Jules Verne’s novel, Journey to the Center of the Earth.   In addition, scenes from The Secret Life of Walter Mitty were filmed on the Snæfellsnes Peninsula.  The woman asks if we went to the Kaldidalur Corridor, which skirts the edge of a series of glaciers, and the Langjökull ice cap.  Of course we have to respond in the negative to this too.

There simply isn’t enough time to go everywhere and do all the activities we want to do without being rushed. 😦

The name Borgarnes means “Borg peninsula” and refers to a farm of that name, Borg. Borg was the home of Egill Skallagrímsson, the titular character of Egil’s Saga (Wikitravel: Borgarnes).

We drive into the town and climb up to the sculpture called Brákin, memorializing a dramatic moment from Egil’s Saga.  It’s named after Egil’s nursemaid who saves Egil’s life by jumping into the sea to escape Egil’s enraged father.  Sound confusing?  It is – that is unless you know the Icelandic sagas.

While standing atop the hill at this overlook, the skies open up.  Mike has seen it coming and has run to the car.  I’m too late, and I get drenched!

We leave the cute little town and continue our drive. My jeans are soaked and it will take some time for them to dry out.

Although we don’t see many trees while in Iceland, there is apparently a lot of native birch woodland that is protected by The Iceland Forest Service (IFS), established according to the forestry and soil conservation act of 1907.  There are also cultivated forests of various species, experimental forests and arboreta, according to an article Forestry in a Treeless Land.  We come across this small forested spot along our drive, with a sign indicating it is managed by the IFS.

We pull off the road when we cross a bridge over a small scenic canyon; we want to have a look and stretch our legs, take in a breath of fresh air.

a small canyon along the road

When I see farmhouses set in idyllic spots, I ask Mike to please pull over.  It’s not always easy to pull over on Iceland’s roads as they are two-lane highways, one lane going in each direction, with no shoulders.  The highways sit atop elevated beds so if you pull off, you will tumble down an embankment about 8-10 feet.  We often try to pull off onto farm driveways or small gravel pull-offs along the roadside.  On some stretches it is impossible to pull off.  Every so often, when we don’t see anyone behind us, we stop the car in our lane; inevitably another driver appears out of nowhere barreling down the highway at 90km/hour.  We can’t count on another driver seeing us in time to stop; they’re probably oohing and aahing at the scenery just as we are!

The total length of the Ring Road is 1,332 kilometres (828 mi). The road is paved with asphalt for most of its length, but there are still stretches in eastern Iceland, about 32km, with unpaved gravel surfaces (Wikipedia: Route 1 (Iceland)).  We are surprised by this because we thought we’d read the whole road was paved.  We were misinformed.

Many smaller bridges, often constructed of wood or steel, are single lane, especially in eastern Iceland.  There are no signals at these one way bridges; drivers are expected to look across the bridge, if possible, and yield to whoever arrives first. On some of the really long bridges, where we can’t see the other side, there are shoulders where drivers can pull over to let people pass by.

As we’re zipping by on the highway, Mike sees a place where people are hiking.  As we’ve already passed it, we stop to take pictures of the bizarre volcanic landscape. 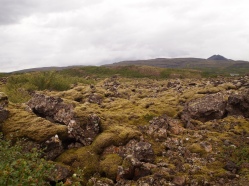 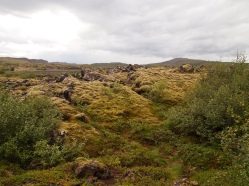 Mike is looking back longingly in the direction of the hiking spot we passed.  At his request, we decide to turn around and do the hike.  We’re glad we do.  We find these are the Grábrókargigar craters, protected as natural monuments in 1962.  The goal of protecting the craters was to preserve the beautifully formed scoria cones that formed in “modern” times and are remarkable natural formations.  The area’s vegetation, particularly moss vegetation, is vulnerable.

There are three craters within the protected area.  Litla (small) Grábrók has mostly disappeared due to mining operations before the area was protected.  The crater we are climbing up is Stóra (big) Grábrók, which rises up near the main road.

We climb up the well-maintained wooden walkway and steps, enjoying the views of the surrounding landscape.

Beneath us, we can see some settlement ruins.

We continue up the wooden walkway to the rim of the crater.  We can see down into the crater.  Of course, the crater is asleep these days; there is no gurgling lava, no rising steam, no ash, no gaseous sulphur smell. 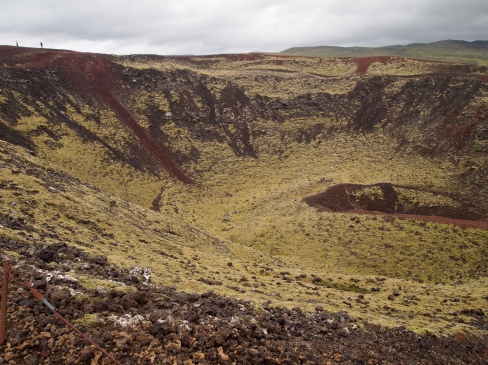 view from atop Grábrók Crater 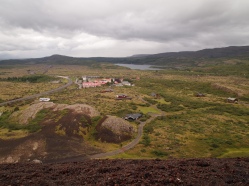 view to the west from Grábrók Crater

As we walk around the perimeter of Grábrók Crater, we can see Grábrókarfell, another crater within the protected area.

We also see some settlements ruins near the base of Grábrókarfell.

All over Iceland, we see campers like the one below, rented from KúKú Campers:  “DON’T STINK AND DRIVE!”  You can check their website to see costs for renting different types of vehicles. As there is no shortage of campgrounds throughout Iceland, this is an economical option for an Icelandic road trip.  During what KúKú calls the “Sexy Season” (June 16-August 31), prices range from 135-279 euros per night.  As we are spending around $100/day to rent a car + gas + hotel rooms averaging around $180 per night, it would have saved us money to travel this way. 🙂

As we pass by the pretty farmstead we saw from the rim of the volcano, I have to ask Mike to pull over again for another picture.

We continue our drive into North Iceland, and we still have a long way to go till we reach Akureyri.

14 thoughts on “iceland: driving the ring road through west iceland (vesturland), with a few (too many) stops along the way”