Tuesday, September 26: Today is our last day in Budapest, and we head out early so we’ll arrive at the Great Synagogue by opening time.  As usual, we walk out of our Airbnb courtyard onto Kazinczy utca and past Szimpla Kert.  Tonight, we’re determined to go inside the famous ruin bar to check it out.

The Great Synagogue, also known as the Dohány Street Synagogue, is the largest synagogue in Europe and the second largest in the world, seating 3,000 people.

On our way to the front of the Synagogue, we peek through the gate at the Raoul Wallenberg Emlékpark (memorial park) in the rear courtyard.  This courtyard holds the Memorial of the Hungarian Jewish Martyrs, created by Imre Varga, which resembles a weeping willow.  The leaves on the metal “tree of life” are inscribed with the family names and tattoo numbers of victims.

Dohány Street once bordered the Budapest Ghetto, part of the old Jewish quarter set aside by the Nazis, where Hungarian Jews were forced to relocate by the Hungarian Government during the last years of World War II, from November 29, 1944 until January 17, 1945.

The synagogue was built between 1854 and 1859 in the Moorish Revival style, based on Islamic models from North Africa and medieval Spain, most notably the Alhambra. The Viennese architect didn’t believe a distinctly Jewish style could be identified, and thus borrowed the style of people who he thought were most closely related to the Israelites, notably the Arabs, according to Wikipedia: Dohány Street Synagogue.

According to our tour guide, the building consists of three richly decorated aisles, two balconies and, oddly, an organ.  The design is more like that of a basilica than a synagogue. Normally synagogues don’t have organs or cemeteries.  The seats on the ground floor were originally for men while the women sat in the upper galleries.

Our guide tells us there are very few openly practicing Jews in Budapest; most Jewish people today are more secular.

The ark contains various Torah scrolls taken from other synagogues destroyed during the Holocaust.

The decorations inside the synagogue are stunning. 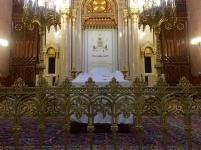 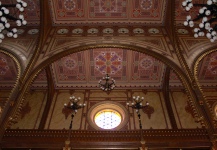 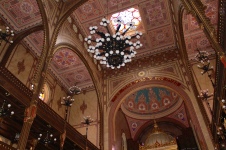 After our tour, we wander around the courtyard to see the Memorial of the Hungarian Jewish Martyrs up close.

There is also a memorial to Raoul Gustaf Wallenberg (born 1912 – death date unknown), a Swedish architect, businessman, diplomat and humanitarian.  He is memorialized for saving tens of thousands of Jews in Nazi-occupied Hungary during the later stages of World War II.  While serving as Sweden’s special envoy in Budapest between July and December 1944, he issued protective passports and sheltered Jews in buildings designated as Swedish territory.

When the Red Army lay siege to Budapest on January 17, 1945, Wallenberg was detained on suspicion of espionage and subsequently disappeared. He was later reported to have died on 17 July 1947 while imprisoned by the KGB secret police, according to Wikipedia.

Other people known as the “Righteous Among the Nations” are also included on the Memorial.  This respectful title is used by Israel to describe non-Jews who risked their lives during the Holocaust to save Jews from extermination by the Nazis.

We find stones placed in a memorial behind the Synagogue.

Over two thousand Hungarian Jews who died in the ghetto from hunger and cold during the winter 1944-1945 are buried in the courtyard of the synagogue. 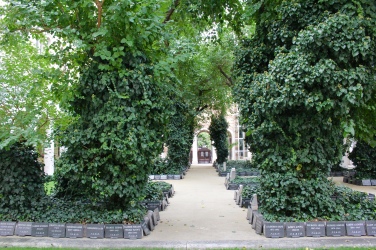 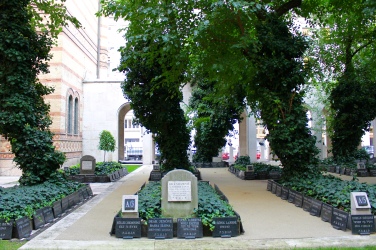 The Great Synagogue is 75 meters (246 ft) long and 27 meters (89 ft) wide.  The style of the building is Moorish but its design also features a mixture of Byzantine, Romantic and Gothic elements.

After we leave the somber synagogue, we head toward Váci utca in Belváros, passing some interesting street art on the way.

We are heading toward the pleasant Belváros, which means “inner city” in Hungarian. It is the name of the central part of most Hungarian cities. Váci utca is one of the main pedestrian thoroughfares and perhaps the most famous street of central Budapest, featuring a variety of restaurants and shops catering primarily to the tourist market.  We’ll make our way down Váci utca toward the Budapest Great Market.

We stop at the Anna Cafe for a double chocolate muffin, orange juice and coffee.  And I wonder why I gained weight on our trip! 🙂

We come across a huge statue of Mihály Vörösmarty, a famous Hungarian poet and dramatist.  A monument by Hungarian sculptor Ede Kallós, constructed in the 1900s, stands in the square that bears his name.

We take our time meandering down Váci utca.  I am tempted by many things, especially the vintage Budapest signs. 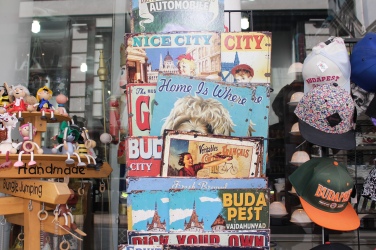 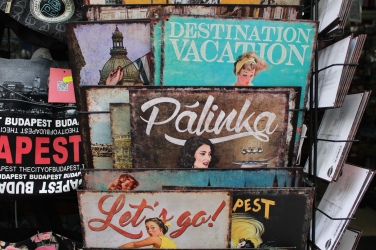 Of course, I can never resist the temptation for textiles, and I resort to buying three scarves for 6 euros each.

As we approach the Great Market, we can’t resist the urge to walk out on Elizabeth Bridge, where we have views of the busy boat traffic on the Danube, Castle Hill, and the Inner City Parish Church.  Located next to Elizabeth Bridge, it is the oldest church in Pest, founded in 1046.  Underneath the baroque façade and the Gothic walls are the remains of a 12th century Romanesque basilica (VisitBudapest.travel: Inner City Parish Church). 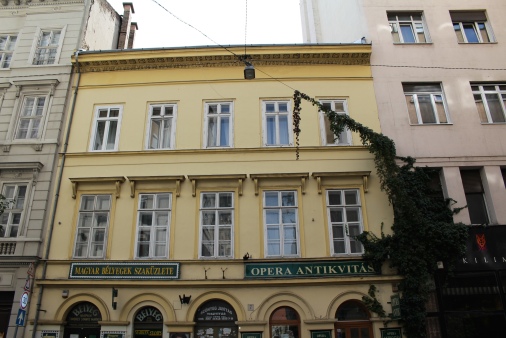 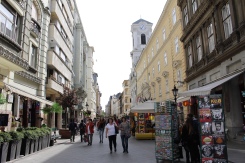 Finally, we’re charmed by a garden of ceramic mushrooms before we head into the Great Market.

At another kiosk outside the Great Market, I run into a young man looking through the scarves.  He says, “They’re all so pretty!”  I say, “Oh, you’re a big fan of scarves?” He says, “Yes, for my girlfriend!” as if to set the record straight that the scarves are not for him. 🙂

14 thoughts on “budapest: the great synagogue & a stroll down váci utca in belváros”