Tuesday, September 26:  After leaving the Hungarian State Opera House, we continue up Andrassy ut to the Terror House, instantly recognizable by the TERROR spelled out on its rooftop overhang.  It contains exhibits related to the 20th century fascist and communist regimes in Hungary.

The first thing we encounter is a threatening tank in the central courtyard and a giant wall of victims’ photos in black and white.

According to the House of Terror Museum website: [The museum is] a monument to the memory of those held captive, tortured and killed in this building. The Museum, while presenting the horrors in a tangible way, also intends to make people understand that the sacrifice for freedom was not in vain. Ultimately, the fight against the two cruelest systems of the 20th century ended with the victory of the forces of freedom and independence.

The museum also contains exhibits related to Hungarian organizations such as the  fascist Arrow Cross Party, a national socialist party led by Ferenc Szálasi, which led the Government of National Unity in Hungary  from 15 October 1944 to 28 March 1945. During its short rule, ten to fifteen thousand civilians (many Jews and Romani) were murdered outright, and 80,000 people were deported from Hungary to various concentration camps in Austria. Called Hungarism by Ferenc Szálasi, the party’s ideology encompassed extreme nationalism, agriculture promotion, anti-capitalism, anti-communism, and militant anti-Semitism, conceiving of Jews in racial as well as religious terms.  It was more racist, and more economically radical than other fascist movements, advocating workers’ right and land reforms, according to Wikipedia.

An interactive map shows Europe as it falls to the Nazis; there is also a collection of black and white photos and highly disturbing videos of Nazi victory, with huge crowds yelling and doing the Hitler salute in unison.  The salute was performed by extending the right arm from the neck into the air with a straightened hand. Usually, the person offering the salute said, “Heil Hitler!” (Hail Hitler!), “Heil, mein Führer!” (Hail, my leader!), or “Sieg Heil!” (Hail victory!) (Wikipedia: Nazi salute).

To me, these videos of thousands of people doing that salute and yelling “Heil Hitler!” is the most disturbing thing in the whole museum.  It seems entire nations were brainwashed, being led like sheep to the slaughter into the devastation of World War II.  It is sickening to watch how people became mindlessly caught up in such hateful ideology.

Urgent dramatic music plays throughout the museum and we see personal effects of people who were deported.

The museum also features exhibits about the communist ÁVH, or State Protection Authority, the secret police of Hungary from 1945 until 1956.  An external appendage of the Soviet Union’s KGB, or secret police forces, it gained a reputation for brutality during a series of purges beginning in 1948, intensifying in 1949 and ending in 1953.

In the Terror House basement, we see examples of the cells that the ÁVH used to break the will of their prisoners.

In the room called Everyday Life, contemporary posters and objects reflect the communist workaday. The mind-set suggested by the crudely garish posters was just as mendacious and miserable as the ideology behind it, according to the museum’s website.

It feels a relief to get out of the dark and loud Terror House and into the sunlight.  Outside, we’re greeted by buildings on opposite corners signifying Japanese and Chinese influence.

Quite by accident, we come upon some white-clad mannequins on a balcony.  I’m not sure what they’re supposed to represent, or if they’re simply there in good fun.

On our way to our Airbnb apartment, we stop for our last Budapest dinner one more time at Két Szerecsen Bisztro.  This time we eat at the sidewalk cafe.

Tonight we share a platter of vegetable tapas, including aubergine spread with flat bread, roasted goat cheese with green apple purée and honey walnuts, oyster mushrooms in a Parmesan and spring onion sauce, and Patatas bravas. We also order the spinach with cream and Serrano ham that I enjoyed so much our first night here.  This time, the ham is a bit chewy, so I don’t care for it. The food simply doesn’t match up.

I tell Mike one should never return to the same place twice as it’s sure to disappoint on the second visit. 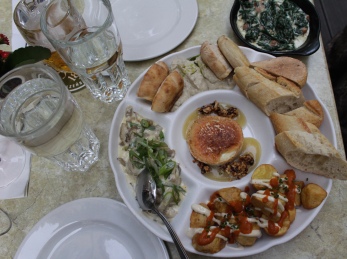 After dinner, we walk back our same route home, past a pretty church, shabby architecture, the Elisabeth Residence, and the park with the mural background.

We stop at Szimpla Kert, the oldest of the famous ruin bars that line our street. The ruin bar phenomenon arose in Budapest in 2000, when entrepreneurs found a ruined or abandoned building in Pest, rented the cellar or ground floor, and encouraged artists to paint murals or decorate in some bizarre fashion. The bars emanate a ruined, shabby feeling, but they’re popular nevertheless.

After ordering a beer here, we walk around the place, checking out all the strange things. 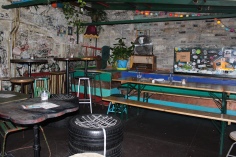 one bar at Szimpla Kert 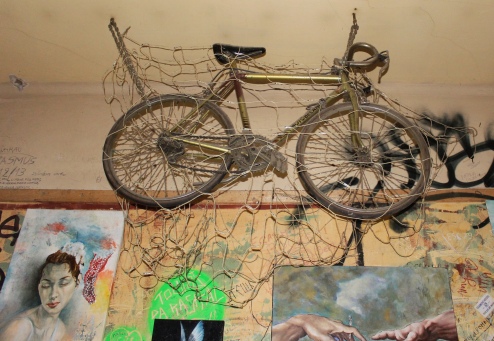 bicycle on the ceiling 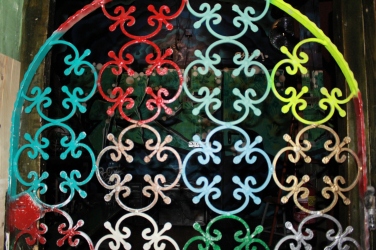 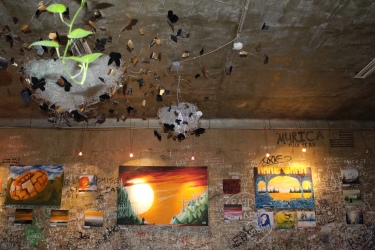 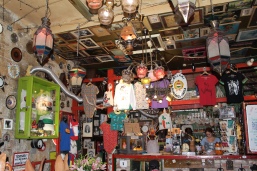 There is even a ruined car whose insides have been gutted and installed with bar seats and a table and squeezed under a set of metal stairs.

There are numerous small bars in nooks and crannies all over Szimpla Kert, but I guess we’re early enough that it’s pretty deserted this evening.

After hanging out here for a while, we walk across the street to our Airbnb, where we start packing for the next leg of our trip.  Tomorrow morning, we’ll take a train to Sopron, Hungary, on the border with Austria, where we’ll stay one night before heading to Vienna.