Thursday, October 5:  Our third day in Prague is a gloomy and cold one.  We brave the weather anyway, as people do when on vacation, and head to explore Nové Město, or the New Town, founded in 1348 by Charles IV outside the city walls, east and south of the Old Town. New Town’s most famous landmark is Wenceslas Square, originally built as a medieval horse market for the working class; it’s now a tourist and commercial center with pedestrian-friendly arcades lined with shops, cafes and cinemas.

Looming over the south end of the square is a Communist-era building. This clunky modern building once housed the Czech Parliament when it was at Moscow’s beck and call.

Under the canopy, a statue of an elated worker from those days is a style known as Social Realism.

A plaque honors Alexander Dubček (1921-1992), a Slovak politician who was leader of Czechoslovakia for a brief year, from 1968-1969. He tried to reform the communist government during the Prague Spring, but he was forced to resign when the Soviet Union and other Warsaw Pact countries invaded to halt the reforms.

The Prague State Opera also dominates the top of the square.

The equestrian statue of St. Wenceslas, the 10th century pacifist Duke of Bohemia, is flanked by other patron saints of Bohemia.

Wenceslas Square is more like a grand boulevard than a square; its expansive setting has been the backdrop for momentous historical events.  In 1918, people came out en masse to celebrate the creation of the new Czechoslovak Republic. After police attacked student demonstrators on November 17, 1989, more than 300,000 angry citizens gathered here night after night, jangling their key chains in the air.  A week later, Alexander Dubček and Václav Havel, a statesman, playwright and former dissident, announced from the balcony of the Melantrich Building, to deafening applause, that Czechoslovakia was free of communism.

Numerous statues stand in the square now, including Tall Dark Strangers by Nikola Emma Ryšavá.  I’m not sure if these are permanent or just temporary.

The purple creature is The Biggest Monster by Andrea Ledlova.

There is a congregation of bold women statues: Punk, Grow from the Inside, Shaman Woman, and Transformace.

Grow from the Inside 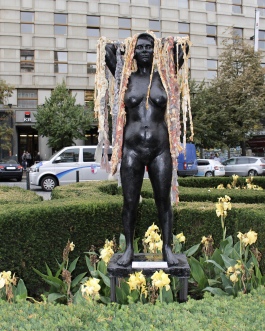 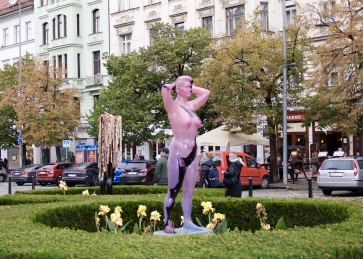 The art nouveau Grand Hotel Evropa is my favorite building on the square.

The Melantrich Building is now Marks & Spencer. The balcony on this building, mostly obscured by trees today, is where Dubček and Havel announced the end of communism.

Inside the art nouveau Lucerna Palace, a shopping arcade runs between two streets. A humorous counterpart to the equestrian statue of St. Wenceslas, the sculpture Kun (Horse), created by contemporary Czech sculptor David Černý, hangs in the lobby.  Atop the upside-down, and certainly dead, horse sits St. Wenceslas.

The arcade contains shops, a cinema, and various cafes, as well as some beautiful art nouveau windows. We stop at a bakery here for coffee and sweet snacks.

a coffee break at Lucerna Arcade

me having coffee in Lucerna Arcade 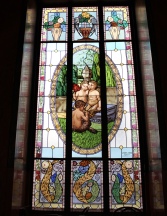 A beautiful 1930s Tesla advertisement adorns one end of the arcade; Tesla is a now-defunct state-sponsored monopoly on electronics production in Czechoslovakia; it produced nearly all electronic products in the country until 1989.  It is well-known for producing the Art Deco bakelite radio between 1953-58.

Outside the arcade, we find a Franciscan Garden, reflecting St. Francis’ belief that God’s presence could be sensed in nature. Prague became an important center for Franciscans from Ireland in the 1600s, according to Rick Steves Pocket Prague.

The Church of Our Lady of the Snows stands at the end of the garden. It was supposed to be the second biggest church in Prague after St. Vitus Cathedral, but it was never completed. 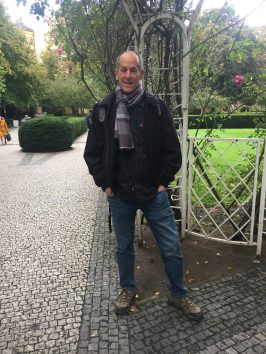 Mike in the Franciscan Garden

Jungmann Square features the statue of Josef Jungmann (1773-1847), a Czech poet and linguist, and a leading figure of the Czech National Revival, an 18th-19th century cultural movement to revive Czech language, culture and national identity. Together with Josef Dobrovský, he is considered to be a creator of the modern Czech language (Wikipedia: Josef Jungmann).

The ornamental Adria Palace served as Václav Havel’s base camp during those two historic weeks in 1989.  Its architectural style from the 1920s is known as “rondocubism,” according to Lonely Planet Prague & the Czech Rebublic.

Though we’re tempted to stop for gelato, we think it might be wise to have lunch first.

The Cubist lamppost by Emil Kralicek is tucked into a corner near the back of the Church of Our Lady of the Snows.

We come out at the north end of Wenceslas Square and Mike promptly stands in line to grab a giant hot dog for us to share.

After I’ve had my fill of our joint hot dog, Mike sits patiently on a bench in the square, while I go into Desigual to check out the fashions. Desigual (meaning unequal/uneven in Catalonian) is a clothing brand headquartered in Barcelona, Spain; it is “notable for its trendy patchwork designs, intense prints, graffiti art, asymmetrical designs and flamboyant splashes of color” (Wikipedia).  I first discovered this brand in 2013 in Barcelona and fell in love with it.  Today, I can’t resist a top and a colorful scarf. 🙂

At the Mucha Museum, we enjoy seeing the artwork of Alphonse Mucha (1860-1939), one of the most celebrated artists of the Art Nouveau period. Sadly, no photography is allowed; I don’t remember how I got this photograph!

We go down to the riverfront to see the famous Dancing Building, built by architects Vlado Milunić and Frank Gehry in 1996. It is also known as the “Fred and Ginger Building,” after the dancing duo Fred Astaire and Ginger Rogers.

statue in front of the Dancing Building

We return to our Airbnb apartment for a bit of a rest and then head out on a walking tour of “Handsome Vinohrady,” a mostly residential area of Prague. Mike found the tour in Lonely Planet Prague & the Czech Republic.

Before we get on the metro, we walk past the Church of St. Ludmila, a neo-Gothic Roman Catholic Church in Peace Square, built on the plans of Josef Mocker in 1888–1892. It is named in honor of St. Ludmila of Bohemia, a Czech saint and martyr.  Saint Ludmila was the grandmother of St. Wenceslas, widely referred to as Good King Wenceslas..

We get rained on a bit here and there as we walk through Vinohrady, but we still enjoy seeing some of the upscale villas so abundant here. 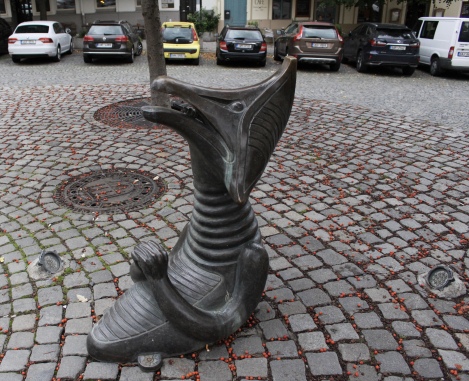 tunnel of trees in Vinohrady

Vinohrady is apparently home to many well-to-do singles and young married couples.

On our walk back, we’re on the lookout for a place to eat dinner, and we find the cozy underground Restaurace PASTIČKA.

At Restaurace PASTIČKA, we enjoy mugs of beer, along with vegetable soup, beets, and dumplings. 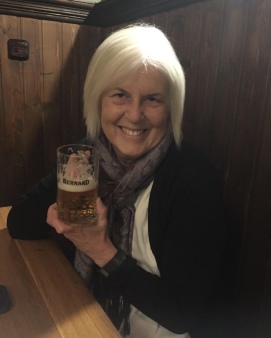 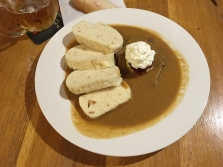 I love the old stairwell of our Airbnb apartment, with its wrought iron railings and old-world tiles.

We have one more day in Prague.  Tomorrow, we’ll go to the Old Town and the Jewish Quarter.