Sunday, September 24:  Today, we get up early to catch a hydrofoil run by MAHART PassNave Ltd up the Danube Bend to Esztergom and Visegrád.  The Danube Bend is a region of hills and charming towns along a series of curves in the river north of Budapest.

If we want to do this cruise during our stay, we have to do it today or Tuesday, as MAHART doesn’t run the hydrofoil on Mondays. As Tuesday’s our last day in Budapest, we don’t want to do it then. We are lucky enough to be here in September, as the company runs the hydrofoils only through October 1.

The hydrofoil leaves the dock at Vigadó Square in Budapest at 10:00.  We reserved our tickets online, but we must be at the dock a half hour before to pay for them. The cruise makes three stops: 1) Vác at 10:40; 2) Visegrád at 11:00; and 3) Esztergom at 11:30.  We’ve decided to take the boat to the furthest point, Esztergom, across the river from Slovakia, and then take a bus to Visegrád.  We hope the timing will be right and there will be seats available to get the hydrofoil back from Visegrád when it stops there at 6:00 p.m., but if it doesn’t work out, we’ll take a bus back to Budapest. Sadly, the hydrofoil only goes up and back down the Danube Bend once each day, so we can’t hop on and off at the various points.

During the 1 1/2 hour cruise up the Danube, we’re disheartened by the rain and clouds we see out the window.  Periodically, hints of blue peek through the clouds, so we’re hopeful the weather will clear up by the time we get to Esztergom.

At 11:30, we disembark from the hydrofoil just past the Mária Valéria Bridge and start heading up a narrow road, where we stop to study a large town map. At the map, we chat briefly with an amiable solo-traveling Irishman named John.  He’s staying in Budapest for a week and doing a series of day trips into Hungary’s countryside.  He’s planning to take the hydrofoil back from Esztergom when it departs at 5:30 and wonders if he’ll find enough to do here for six hours.  We tell him our complicated plan to take the bus to Visegrád, and he wishes us luck in our quest.

We can’t miss the huge Esztergom Basilica on the hill south of the bridge. It’s simply a matter of how to make our way up there.  Mike studies the map and figures out the way.  We’ve decided he’s good with paper maps, and I’m good with GoogleMaps, which provides bus & train routes and timetables, and even helps us find our way when we’re lost.  I depended completely on this app while in Japan.

We pass by the local restaurant, SZALMA CSÁRDA, but it’s a little too early to stop for lunch.

Mike, a big cycling fan, is happy to see a well-organized time trial taking place with all ages of well-kitted teams involved.  At the same time, a half marathon is going on in the town.  While he is excited to see lively athletics going on in the historic town, I feel that it takes away from the old-world nostalgia that should be evident in an old European town.  I know, I’m a bit of a curmudgeon in that regard. 🙂

These two photos are Mike’s.

Of course, we have to walk over the 500-meter-long Mária Valéria Bridge to see the views of the Basilica and to say we crossed the border into Štúrovo, Slovakia.

The bridge is named after Archduchess Marie Valerie of Austria (1868-1924), the fourth child of Franz Josef and Elisabeth, also known as Sisi. Since its opening in September of 1895, the bridge has been destroyed twice. In July of 1919 the bridge was destroyed by a detonation at its first pier on its western side but the bridge was renovated in 1922 and completely reconstructed in 1926. During World War II, retreating German troops blew up the bridge on 26 December 1944 along with other bridges near Esztergom.  The bridge finally reopened in 2001 (Wikipedia: Mária Valéria Bridge).

We find some coats of arms on the bridge, but I can’t tell you their significance.

coats of arm on the Mária Valéria bridge 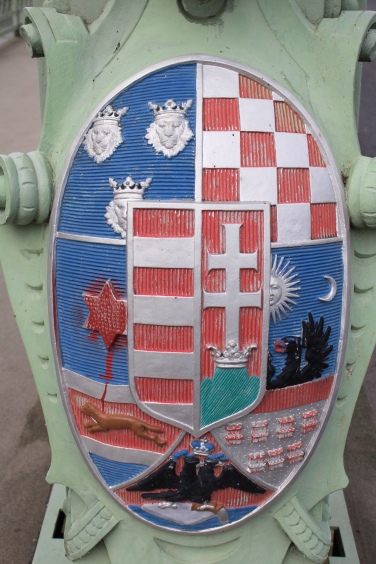 coats for arms from the Mária Valéria bridge

We also find some fantastic views of Esztergom Basilica on the bridge, along with the Danube cruise boats.

We cross over into Slovakia, but I won’t count it in my list of countries visited (29 so far) until I actually visit it properly.  I hope to do that within the next couple of years.

The Danube is Europe’s second largest river, after the Volga River. Today, it flows through ten countries, more than any other river in the world.  Originating in Germany, it flows southeast for 2,860 km (1,780 mi) before emptying into the Black Sea.

Hungary’s first king, St. Stephen, was born in Esztergom in 975.  From the 10th till the mid-13th century, Esztergom was the capital of Hungary, until King Béla IV of Hungary moved the royal seat to Buda following the Mongul invasion in 1241.  Today, the town is the seat of the prímás of the Roman Catholic Church in Hungary, and the former seat of the Constitutional Court of Hungary. Esztergom Basilica is the largest church in Hungary.

After seeing the views down the Danube and of the Basilica, we turn around on the bridge and cross back into Hungary. 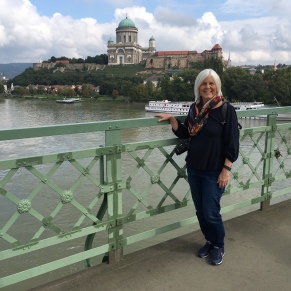 me on the Mária Valéria bridge

We make our way toward Castle Hill and Esztergom Basilica, crossing a bridge and passing by the pretty Vizivaros Parish Church.  We have to be careful of the bicyclists and the runners as we cross the street!

I’m sure it would be fun to see the Budapest Circus. 🙂

We walk up and up through the town, trying to find the entrance to the Basilica. 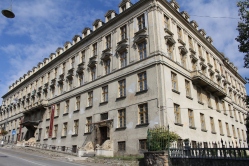 statue at the Basilica

heading into the Basilica

Inside Esztergom Basilica, consecrated in 1856 with a sung mass composed by Franz Liszt, a copy of Titian’s Assumption hangs over the main altar.  It is said to be the world’s largest painting on a single canvas, according to Lonely Planet Hungary.

The Basilica’s 72m-high dome beckons, so up the 400 steps we go to the top.  At a midway point we can peek through an arch to the town below; there is also a small museum displaying a model of the Basilica.  Then back inside the increasingly narrow spiral staircase we go to continue our climb.

Around the perimeter of the dome is a wooden-plank fenced platform. It seems sturdy enough, but not like the concrete balcony on St. Stephen’s in Budapest.

Across the Danube, we can see Štúrovo, Slovakia.

We also have fabulous views of Esztergom.

When we complete the circle around the dome, we’re stopped by a gatekeeper who tells us we must wait five minutes until everyone finishes coming up the stairs.  I’m relieved in one sense, because the steps are so narrow I dreaded going down and having to share the steps with the climbers.  However, five minutes pass, then 10, 15 and 20 minutes.  Meanwhile, a steady file of people has emerged from the stairwell onto the planked balcony and I can’t help but worry about the structure’s ability to hold so many people!  I say to Mike, “I wonder if they have a system — if anyone below is stopping the people from coming up, or if we have to wait here indefinitely!”  After several extensions of our 5-minute waits, I ask the gatekeeper, “Do you have a system?  Is someone down below stopping the people from coming up?”  He assures me the man below is at work, but I’m not sure I believe him!  Finally, after what seems like an eternity, we’re allowed to descend. Whew!

me waiting for “the system” to work

We finally get down!

Now we have to make our way to the bus station.  We know the direction we need to go as we had scoped out the location when we looked at the large town map when we first disembarked from the boat.  We just have no idea how long it will take.

Walking nearly a mile along the town streets, we pass some lunchtime eateries, but we decide we should wait until we get to the bus station so we’ll know what time the bus leaves.  Then we can seek out a cafe near the station.

When we get to the rather decrepit bus station, there is no one manning the station.  Most of the building is closed off to outsiders.  In one room, a bunch of bus drivers are hanging out and chatting. We had seen a long yellow bus with “Visegrád” on its front pass us by on the street at around 1:40, as we walked to the station.  When we arrive at around 2:00, we try to figure out what’s going on, and finally we see a big yellow bus pull up. We ask, “Visegrád?” and he indicates “3” with his fingers.  We thus assume the bus will depart at 3:00.

There don’t seem to be any cafes about. After wandering around the station, we find a small bakery and order breaded snacks.  I get a small cold pizza which I don’t care for at all as it seems to use ketchup instead of tomato sauce (I hate ketchup!). Mike calls this lunch “bus stop grub,” quick and cheap ($5).  We have to eat our snacks sitting on a bus station bench.

I’m pretty grumpy because I wanted to sit at a cafe and I also wanted to use a bathroom before getting on the bus. There doesn’t seem to be a bathroom at the station.

Finally, a Hungarian woman comes and sits next to us on the bench.  She informs us in her halting English that the bus actually leaves at 2:40, so it’s a good thing we didn’t count on the bus driver’s 3:00 indication!  I ask about a bathroom and she points to the end of the station, where I see a key is required.  She tells me it costs 50 Forints.  I go into the room full of bus drivers and ask for a key. They give it to me, I use the bathroom and return the key, handing the man 50 Forints, but he refuses it.  Apparently the 50 Forints is the required deposit, which one is supposed to pay when originally getting the key! 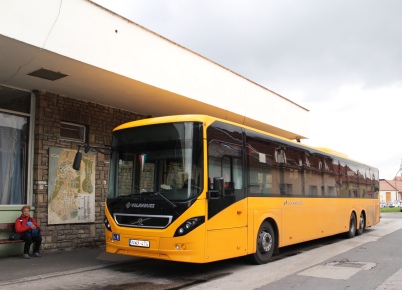 Mike waits at the bus station

At 2:40, we hop on the local bus to Visegrád, about 26 km away.  It takes about 45 minutes, as we make over a dozen stops along the way for all the locals.