Thursday, August 18: This morning we enjoy a fabulous breakfast at the Lamb Inn and then soak in our parting views of the valley and the farm before heading east on the Ring Road.

Before we leave Akureyri, we stop at the road that crosses Eyjafjörður at its tip and look at the view toward the south, where we stayed the last two nights.  Then we’re back on the Ring Road heading toward Seyðisfjörður in East Iceland.  We have a 182 mile drive ahead of us with multiple stops planned along the way.

Our first stop is Goðafoss, which means Waterfall of the Gods.  Though not the largest or most powerful of Iceland’s waterfalls, it is one of the most beautiful, flowing over a horseshoe-shaped ledge in two main chutes and one smaller one with numerous vantage points.  It is part of the river Skjálfandafljót, which runs through the ~7,000-year-old Bárðardalur lava field in Northeast Iceland.

Goðafoss played an important role in Icelandic history.  At the Alþingi, or National Assembly, in the year 1000, lawspeaker Þorgeir Þorkelsson had the job of settling the growing disputes between Christians and those who worshiped the old Nordic gods.  After 24 hours meditation, he declared Iceland would be a Christian nation.

Legend has it that on his return home past the waterfall near his farm, he dispensed of his pagan gods by throwing them into the falls in a symbolic act of the conversion. This, according to the legend, is how Goðafoss got its name.

Then we take the path to the bridge downstream from the waterfall and walk up the east side of the river.

It’s a spectacular day out, cool and breezy and sunny, and we have fun exploring both sides of this amazing waterfall.

The skies and the clouds are simply spectacular.

The eastern side of the waterfall is less crowded as the path is further from the parking lot.  On this side, we’re thrilled to find a rainbow rising out of the mist.

Finally, we visit the service center Fosshóll, close to Goðafoss, where we get drinks and snacks, use the facilities, and head further along the Ring Road to the Mývatn region.

Wednesday, August 17:  We arrive back at the town of Dalvík, a village on the western shore of Eyjafjörður in the valley of Svarfaðardalur, just in time for our 3:00 whale watching trip with Arctic Sea Tours.

As soon as we check in, we’re given arctic suits and told to hop into them.  It’s actually getting quite warm this afternoon, so it’s too hot to be wearing these suits.  Many people keep the tops unzipped and folded down over their behinds.

When everyone has arrived, we all march down to the marina to board the boat.  The marina with its backdrop of snow-capped peaks is charming and picturesque.

our seafaring boat, the Draumur

We aren’t going out into the Greenland Sea but will stay in Iceland’s longest fjord, Eyjafjörður, measuring 60km from head to mouth.  The tour is for 3 hours.

The fjord is surrounded by hills and mountains on both sides; the mountains are taller on the west side.  The mountains pictured below on are the east side.

Freyr Antonsson is the man in charge.  After we’re underway, he shows us photos of the creatures we might encounter, especially the great humpback whale, white-beaked dolphins, minke whales, small harbor porpoises and possibly even the majestic blue whale.  Today, we’ll see only humpback whales and harbor porpoises.

Even though it was warm on land, it’s quite cold and windy out on the fjord.  Luckily we’re bundled up in our Arctic suits and winter hats.

We can see the tip of the island of Hrísey in the middle of Eyjafjörður.  It is the second largest island off the coast of Iceland and is often referred to as “The Pearl of Eyjafjörður.” It has a population of approximately 120 people and has been continuously inhabited since the Settlement of Iceland (Wikipedia: Hrísey).

We can see the western mountains on Tröllaskagi, the “Troll peninsula.”

The mountains surrounding the fjord are treeless and capped with snow. 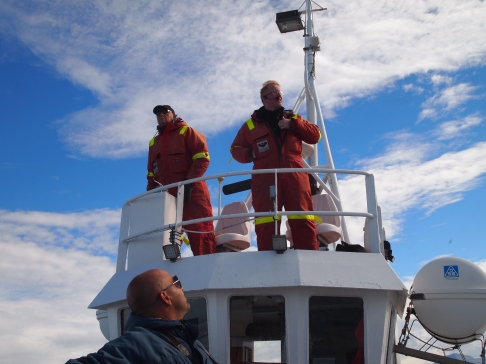 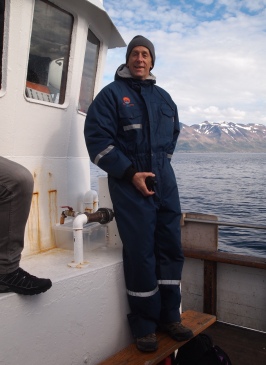 As we approach the mouth of the fjord near the Greenland Sea, we start to see some humpback whales.  Their backs rise out of the water and we can sometimes catch a glimpse of their tails before they submerge again.  When they’re just under the surface of the water, we can see a flat area in the water with bubbles rising.

Sometimes when they surface, their backs are just slightly above water, but other times, they curve out of the water in a nice hump.

I’m excited to finally capture one decent tail picture.  It’s very difficult to capture the whales on camera as you have to be looking at the sea in the exact spot where they rise up unexpectedly and you have to have your camera ready to shoot.  Often, they are simply too far away to get a decent picture.

During the trip, the crew hands out hot chocolate and cookies for a warming-up snack.

As we head back to Dalvík, the crew passes out fishing poles all around and people toss their lines overboard.  It’s amazing how quickly they start to pull in fish.  Different people on board pull up cod and three other types of fish.  This young man catches a big one!

Mike even tries his hand at fishing but doesn’t catch anything.

The captain cleans all the fish on board, tossing the heads and entrails overboard, while seagulls flap along overhead hoping to catch some scraps.

We arrive back at the marina and head back to the Arctic Sea Tours office.

Click on any of the pictures below for a full-sized slide show. 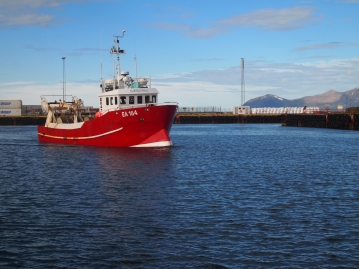 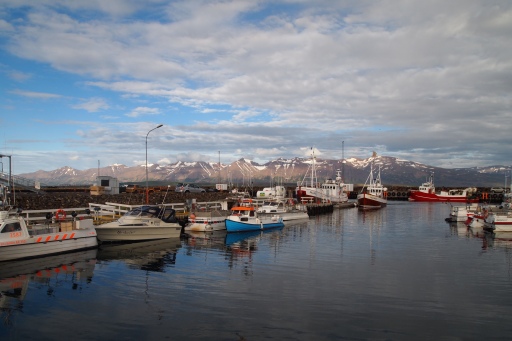 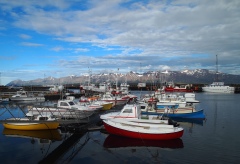 Back at the Arctic Sea Tours office, Freyr Antonsson fires up the grill and barbecues the fish we caught and he cleaned.  We each get a small portion of the various fish cooked with a butter spice topping.

After enjoying our snack, we get on the road back to Akureyri and the Lamb Inn.  At the inn, we soak for a while in a hot tub behind the inn and talk with a couple from Bucks County, Pennsylvania, Ray and Marybeth, who are enjoying their holiday in Iceland.  They are quite the talkers. 🙂

We have 8:00 dinner reservations at the Lamb Inn and we find our dinner to be one of the best we have in Iceland.  I order traditional fish gratin (made with cod) “dressed up” with butter and rye bread.  It’s delicious!

Mike’s meal of slow cooked lamb shank with chives, mashed potatoes and wild mushroom sauce is also wonderful, and I’m not generally much of a meat eater.

We’ve had a busy day with our drive all around Tröllaskagi, our hike around and above Siglufjörður, and our whale-watching tour.  Tomorrow we’ll sadly have to leave Akureyri for the east of Iceland.  We should definitely have planned more time for our trip.

Tuesday, August 16:  We arrive at Lamb Inn Öngulsstadir at around 7:00 pm.  We immediately fall in love with its idyllic setting in the valley at the end of Iceland’s longest fjord, Eyjafjörður.

The Lamb Inn is set on a former farm and the family still lives adjacent to the property.

Mike finds a Border Collie that reminds him of our dog, Bailey.

After settling in, we drive into the town of Akureyri, Iceland’s second urban area after the Capital Region, and the fourth largest municipality.  It would be considered a small town by most standards, with a population slightly over 18,000.  Known as the Capital of North Iceland, it’s an important port and fishing center.

We are debating between eating at Rub 23 or Strikið.  We opt for the latter.  But first we take a short stroll around the town.

Akureyrarkirkja, or The Church of Akureyri, is a prominent Lutheran church that towers over the center of the city.  It was designed by Guðjón Samúelsson, the State Architect of Iceland, and completed in 1940. 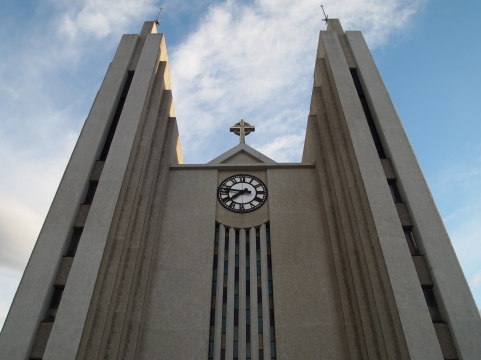 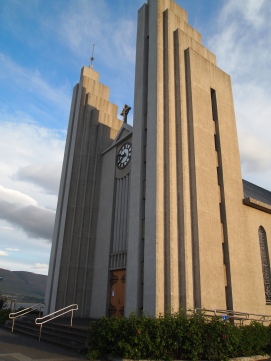 Walking down from the hill, we can see the harbor at the end of Iceland’s longest fjord, Eyjafjörður.

We settle in at Strikið, on the fifth (top) floor of Skipagata 14.  I’ve become fond of an Icelandic white ale, Einstök Ölgerð.  We enjoy our views over the harbor and I love my meal of Wolffish and Caridean shrimp in lemon & capers, potato mousse, parsnip and mussels sauce.  Mike orders Reindeer burger with “Ljotur” blue & white cheese, herb mayonnaise, salad, peppers and tomato in brioche bread, served with fries.  He doesn’t seem as enamored with his meal; for one, it’s too much food.  He says the reindeer has that gamey flavor similar to venison.

After dinner, which is after 9:00, we stroll around by the harbor and enjoy the beautiful light as the sun goes down.  We see the cultural center, Hof, used for music and other performing arts.

We also find some whale-watching boats.

At nearly 10:00, the sun is finally setting, as we return to our hotel for the night.