Tuesday, September 26:  After leaving Elizabeth Bridge, we get back on Váci utca heading toward the Nagycsarnok, or Great Market.  Once inside, we wind our way through the crowds in search of lunch.  The lower level has fruit, vegetable and meat stalls, but the upper level has Hungarian dry goods and hot food stalls. All the food stalls, which have enticing food such as stuffed cabbage rolls, are fronted by long lines, and all seats are taken.  It will be a long wait to get any food here, and even when we do get some, there will be no place to eat it.

Regretting those missed cabbage rolls, we go back out to Váci utca, where we find the Old Street Cafe.  Here we stop and sit outside in a patch of sunlight.  I ask the waiter what the man next to me has on his plate, and he tells me it’s a Stuffed pancake Hortobágy style, a pancake stuffed with chicken and covered in gravy.  I order that.  Mike orders Tuscan tomato soup (Pappa al Pomodoro) with celery and a cucumber salad.  He’s certainly being more healthy than I am. 🙂

After lunch, we go back into the Great Market Hall, the largest and oldest indoor market in Budapest.  It was built and designed by Samu Pecz around 1897.

The Hall’s colorful roof is covered in Zsolnay tiles from Pécs, Hungary’s fifth largest city.  I love these tiles, found in so many places in Budapest.  The 10,000 square meter building has a Gothic Revival entrance gate and is covered by a steel structure.  Completely damaged during the World Wars, restorations brought the market back to life in the 1990s.

On the ground floor, we find a folk group playing some lively tunes.

We wander around the ground floor first, among the stalls of produce, meats, dairy products, pastries, candies, spices, and spirits.  We see local salamis, cheeses, Hungarian paprika, foie gras, caviar and garlands of dried peppers and garlic.  We find spirits such as Tokaji (wines from the Tokaj region), and local snacks such as Túró Rudi, a bar with a thin chocolate-flavored outer coating and an inner filling of túró, or curd.

The basement contains butcher shops, the fish market, and picked vegetables including the traditional cucumber pickles, as well as cauliflower, cabbage, beets, tomatoes, and garlic.  However, we don’t visit the basement as we find plenty on the top two levels to keep us occupied.

Click on any of the photos below for a full-sized slide show. 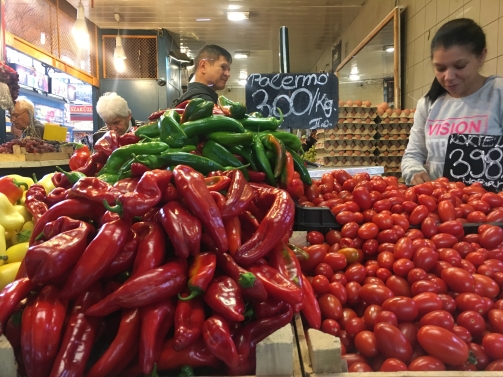 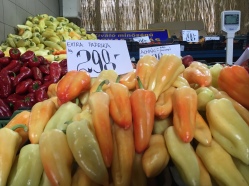 peppers at The Great Market

garlic and fruit at The Great Market

salamis and meats at The Great Market

The second floor has mainly eateries and souvenirs.  We find matryoshka dolls, sets of wooden dolls of decreasing size placed one inside another.

Wonderful red-cheeked Santa ornaments smile at us in a festive display.

I fall in love with this poster, which captures the Széchenyi Thermal Baths’ Old World charm.  This becomes one of my purchases. 🙂  Mike also buys a gray T-shirt with a white bicycle on it.

The Hungarian laces are intricately woven and colorful.

I’m also tempted by the folk art, but I can only carry so much in my already full suitcase!

Click on any of the photos below for a full-sized slide show. 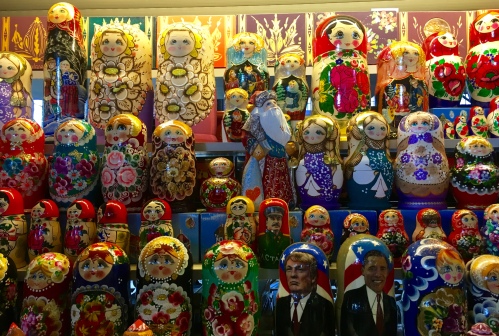 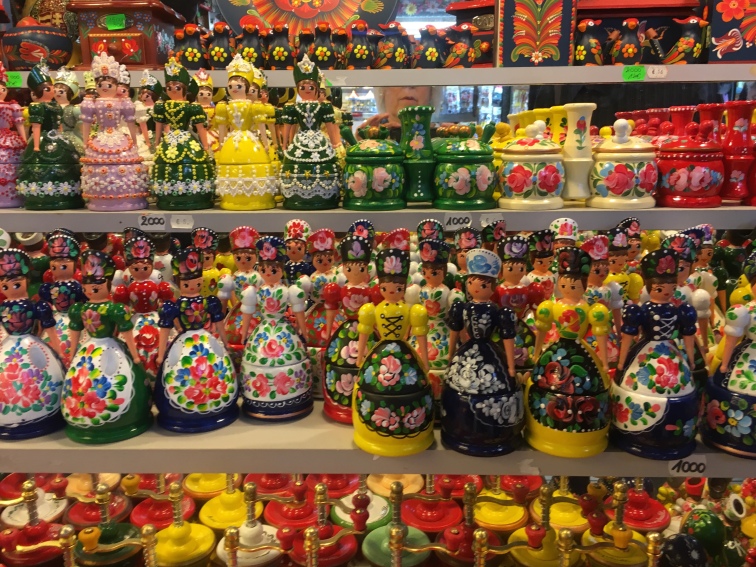 After our foray through the Great Market Hall, we hop on the tram and then switch to Metro 1 to get to the Hungarian State Opera House.  We’re determined on our last day in Budapest to join the 3:00 English tour.  You can only visit with a guided tour, and we already missed this on our first day. There are guided tours of the building in six languages (English, German, Spanish, French, Italian and Hungarian) almost every day. 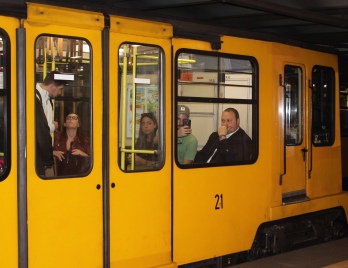 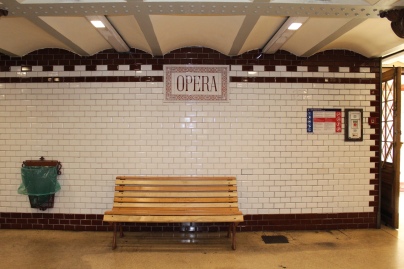 The Neo-Renaissance Hungarian State Opera House, with some elements of Baroque, was designed by Miklós Ybl, one of Europe’s leading architects in the mid- to late-nineteenth century.  Although not famous for its size or capacity, acoustically it is considered to be one of the world’s finest.  It was built in 1884.

The season lasts from September to the end of June and, in addition to opera performances, the House is home to the Hungarian National Ballet.

In front of the building are statues of Ferenc Erkel, who composed the Hungarian national anthem, “Himnusz,” and was the first music director of the Opera House; he was also founder of the Budapest Philharmonic Orchestra.  A statue of Franz Liszt, the best known Hungarian composer, is also featured.

Inside the Opera House are fabulous paintings and sculptures by leading figures of Hungarian art including Bertalan Székely (1835 – 1910), a Hungarian history and portrait painter who worked in the Romantic and Academic Styles; Mór Than (1828 – 1899), Hungarian painter; and Lotz Károly Antal Pál (1833-1904), a German-Hungarian painter (Wikipedia: Hungarian State Opera House).

The tour starts at the Grand Staircase, which leads from the two sides of the foyer directly to the ground floor auditorium entrances.

The golden-coffered reflective ceiling above the Grand Staircase features Mór Than’s paintings across nine squares representing “The Awakening and Victory of Music,” while the decorations featuring mythological scenes above the windows are also his work, according to the Opera House website.

The Feszty Bar, with its warm noble oak paneling, has a low richly gilded ceiling with paintings of Dionysus’s birth and upbringing; its walls are decorated with landscape paintings.  This is where the country’s finest citizens gather to see and be seen.

ceiling of The Feszty Bar

walls of The Feszty Bar

ceiling of The Feszty Bar

ceiling of the The Feszty Bar

Flanking the Feszty Bar is a smoking corridor decorated with blue-gold drapes.

wallpaper in the smoking corridor

The horseshoe-shaped, three-floored auditorium supposedly seats 1,261 people, although today, the floor seats have been removed in preparation for a big renovation, which will take place over the next several years.  At one time, vents under the seats blew out air mixed with water to create a moist atmosphere.

The round ceiling is decorated with Károly Lotz’s cupola fresco, titled the “Apotheosis of Music.”  At center is the lute-playing Apollo, with an audience of Olympic gods, the graces, muses and demons. Miklós Ybl designed the chandelier, which is lowered to the ground floor with the aid of a winch twice a year to replace its expired bulbs.

According to legend, when the Empress and Queen Elisabeth, affectionately known as Sisi, wished to break her solitude in the Royal Palace of Gödöllő by visiting the Hungarian capital, she watched performances from what is now called the Sisi box. Our guide tells us she couldn’t see the stage from here.  Greatly admired by the Hungarian people, she attended to be seen, not to see!

This statue bears a resemblance to Sisi, but is actually a famous opera singer.

At the end of the tour, we get to see a mini-concert, which is quite funny as the singer holds open an accordion book of the many women he tries to juggle in his life.

Across the street from the Hungarian State Opera House is a now-abandoned building that is waiting for the right owner to revive it in some form.

We leave the Opera House, walking up Andrassy ut in search of the Terror House.